Nancy Bauer is a philosophy professor at Tuft University interested in issues related to gender, history, and film. A friend of mine and former student of hers suggested I contact her, explaining that Nancy was by far the best professor she’d ever had. She has won several teaching awards and also serves as an advisor in the departments of Women’s Studies and International Relations. Her book, Simone de Beauvoir, Philosophy, and Feminism, was published by Columbia University Press in 2001. 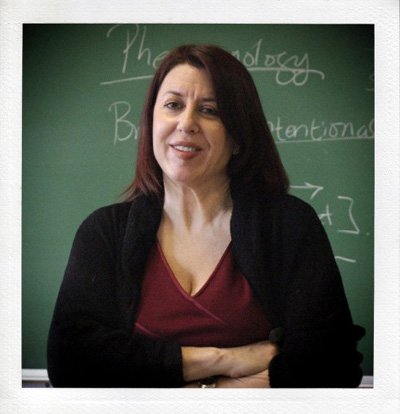 I spent 18 years, on and off, at Harvard and collected a number of degrees there: an AB in Social Studies; a master’s degree in Theological Studies; and a PhD in Philosophy. I also spent two years in the Study of Religion PhD program and a year at the Radcliffe Institute. So my formal education was decidedly parochial.

My first job other than babysitting was working as a waitress and a line cook at a Friendly’s. My first professional job was being a (actually, the first full-time) Cape Cod reporter for The Boston Globe.

Writing ephemera for a daily paper started to wear on me, so I accepted an assignment at Children’s Hospital in Boston to co-write and edit The Child Health Encyclopedia, a reference work for parents. Half the job involved interviewing doctors about the various childhood diseases and disorders they treated; the other half consisted in doing research at Harvard’s Countway Medical Library. In retrospect, then, this was a midway point for me between my old life as a reporter and my next life as an academic.

I was in charge of most of the entries on mental health problems. This was right after the insurance rules changed and Medicare started demanding that doctors classify all of their patients’ maladies according to a limited set of “diagnosis-related groups” (DRGs). A doctor who might once have diagnosed, say, a 10-year-old child who was worrisomely fidgety or moody via a long, careful description of her behaviors was now forced simply to check off a box on a form. So all of the sudden this child was “bipolar,” full-stop. My interviews with doctors were riveting: they all talked, with much frustration, about how children were now rising to the occasion, as it were, and conforming their symptoms to the broad-scale diagnoses they were told they had.

I had taken only one course in philosophy as an undergrad, and in my naïveté I thought that what you might call the DRG effect was a straightforward ethical problem. So I started attending ethics rounds at the hospital. In those days, the hospital ethicist was usually the chaplain; and the leader of the ethics group was Arthur Dyck, a professor at Harvard Divinity School and the Harvard School of Public Health. The div school had a program in medical ethics, and Dyck encouraged me to apply. I had been so obsessed with journalism as an undergrad at Harvard—I was the managing editor of the Crimson, the daily paper—that my classes had been an afterthought. The beauty of Harvard Divinity School was that you could take courses for credit in Arts and Sciences. So I figured I’d go back and make up what I’d missed in college.

About a semester into div school I realized that the DRG effect was not so much an ethical phenomenon as it was a linguistic one: what something is called can have the power to change what that thing is. This discovery has driven all my work in philosophy. My favorite example is the way in which Catharine MacKinnon’s use of the concept sexual harassment changed not only the law but also women’s experience of what was happening to them.

I love writing. But the most exciting thing about what I do is my teaching. The material I teach often touches students existentially as well as intellectually. They discover, à la my experience with the DRG effect, what it’s like to experience a radical Gestalt shift in the way they see the world. Sometimes it’s painful watching students as they grapple with confusion about how to construe aspects of their lives, and of the world, that they previously hadn’t questioned. But it’s very satisfying to watch them develop the ability to be skeptical about the skewed and impoverished terms in which an unjust world allows them to describe their experience and to insist on the expanded space of social possibilities that can come with a radical shift in how we name things.

Women earn only about 20 percent of the PhDs granted in Philosophy. All women in the profession, even those with no feminist consciousness, cannot help but confront this fact. There’s obviously massive pressure to play the boys’ game. But outlier status gives a person a critical perspective on the mainstream, a perspective that can push you to challenge its various sorts of blindspots and complacencies. I think I’m a better philosopher for being a woman.

See my answer to the previous question. Philosophy is hard work. Unlike most other academic disciplines, there are no widely agreed-upon standards of excellence. We don’t do experiments, and we aren’t trained in collecting or evaluating evidence; we don’t cure patients or win court cases or make profits. Our standards of excellence are exclusively those of “reason itself,” which in practice means that they are the standards of whoever happens to be powerful in the field at the moment. Every halfway decent philosopher has middle-of-the-night panic attacks—moments of serious doubt about the value of his or her work. If you’re a woman exploring a perspective that the mainstream devalues, you have to fight every step of the way to hold onto your sense of self-worth.

Hands down: Simone de Beauvoir. Her situation was completely different from mine. But I admire utterly the way that, against all odds, she was relentlessly determined to live her own life. At the same time, she was astonishingly sympathetic to women who weren’t as brave or otherwise well-positioned as she was.

If you could give one piece of advice to a woman starting out in
your field, what would it be?

All women in philosophy “know,” even the ones who appear to be passing. Find those of us who aren’t afraid to talk about what it’s like and, more importantly, are doing something about it.