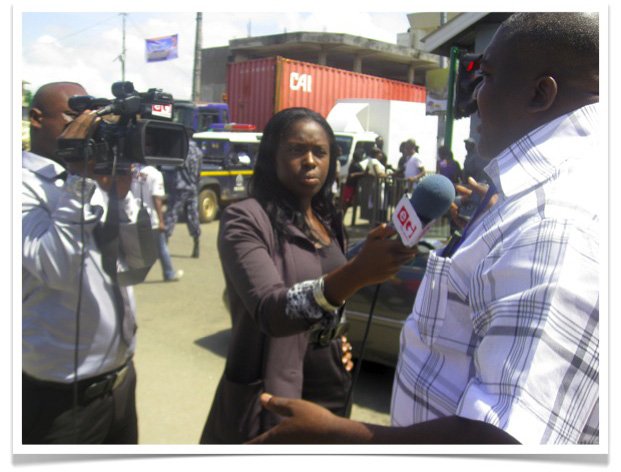 My first job was a sales associate at the Gap. It was pretty cool back in the 90’s to say you were working at the Gap. I had to greet customers and be happy and bubbly while I folded clothes but I was really shy and reserved back then. My boss would often remind me to engage the customer but I was too shy and quiet to talk to strangers! It took me a while to breakout of my shell.

I was inspired to break into the realm of journalism from having immigrant parents (from Ghana) who always wanted to be in the know of what was going both domestically and internationally. I never grew up with storybooks or nurse rhymes or other aspects of conventional American child’s play, although I was born in the States. I was surrounded with Newsweek and Time magazine so that’s what I read. My parents watched the news all day, so I watched the news all day. I was a very adult-like child. I thought cartoons were childish! Even as a kid I enjoyed telling my peers something new or something that they didn’t know whether it was news, politics or music. I loved trivia and being able to know a little bit about a lot.

My most rewarding project so far has been reporting from Cape Coast Castle in Ghana. It is the center of the Trans-Atlantic Slave Trade. From a personal perspective, many African-Americans do not take advantage of the opportunity visit the “Motherland.” As an African-American, I felt privileged to visit the Cape Coast, create a news piece on it and share it. To know that I was in the very place where my fellow African-Americans originated from was unequivocally moving. Witnessing what millions of Africans endured while in the slave dungeons for hundreds of years prior to being sold into slavery stirred up a number of different emotions. I was left humbled and also filled with rancor. Although I will admit that my piece on Cape Coast Castle isn’t my best, the opportunity to shoot a news piece there was unprecedented.

Being a woman helped me immensely in my previous career has a high school teacher. I was elected to serve on the Board of Directors for the YWCA (Young Women’s Christian Association) while I was teaching. During my first year on the Board, I never spoke during the meetings and wondered they asked me to serve on their Board. During my second year, I began to speak up more during our board meetings and advocate for the teenage girls I was exposed to as a teacher. I was asked to be a part of team of young women who were from the New England area and who were also YWCA board members. Collectively, we created the “30 Under 30” initiative to empower, engage and retain young women under 30 within the organization. The initiative reached a national level and has since had a major impact within the YWCA. Being a woman helped me relate to young women in my community and at the time, I didn’t even know it. I didn’t know that the general public had no idea of their thoughts, concerns or aspirations. Now, as a journalist, I thrive off of stories from women from all walks of life. I’m inspired by the plight of women and make it a point to get their stories seen and heard.

Being a woman has never really hindered my career but working as a female journalist in Africa isn’t easy. In my experience, due to cultural norms and religious beliefs women are at the bottom of the totem pole as far as journalism/media is concerned. There isn’t a mass presence of women out in the fields getting hardcore news stories done. You may hear their voice on the newscast but you won’t see their face. The industry here is male dominated so I face struggles almost daily, especially with me being born and raised in America.

Lately, my role model is my mother. My father is very sick and my mom takes care of him everyday. She feeds him, bathes him, changes him and manages all of the household affairs. My mother was always very well taken care of and never had to do any of that. She is my role model because despite any career or how beautiful people tell you you are, a real woman takes care of her home and takes care of the things that people don’t see. My mother embodies that. My career is on television, which can lead people to believe that your life is perfect. I’m not married but my mom’s current situation makes me think that any man who wants to me marry must look beyond my face and beyond my career and ask himself if I have displayed a character that will feed him, bathe him, and change him if necessary, when I’m home from being a beautiful star on TV.

One piece of advice I would give to a woman starting out in this career is to operate out of an optimistic and positive mind reminding yourself that your daily ventures, as annoying and mundane as they may be, will one day take you to where you want to be in your career. In this field you must think long-term and I still struggle with this every single day. Working in journalism can be quite negative due to the content of what we report. With that being said, try to limit harboring negativity in your thoughts or conversation, as it will spill out into your actions…and always carry tampons because they don’t sell them in Africa!!!