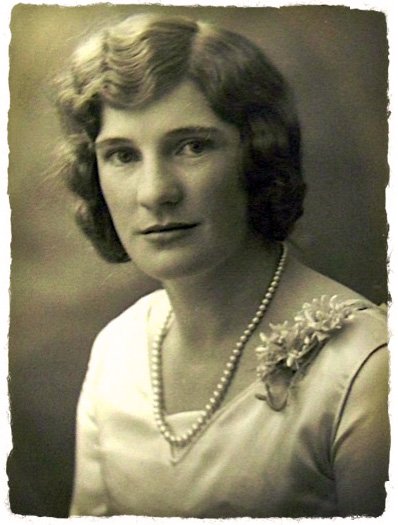 My Grandmother, Hanna Lovisa Johansson was born and raised in a small town in Sweden. Hanna was one of 8 children. Hanna came to America in her 20’s with only a 6th or 8th grade education, her schooling had been in a one room schoolhouse in her homeland. In the 1920’s she, and at least one of her sister’s, “Hilda” came to the U.S. and worked as domestics for wealthy families. Hilda ended up working for then Governor Lowden of Illinois and my Grandmother for the Studebaker family in South Bend, Indiana. Hanna was a specialty cook in the Studebaker mansion and all but ran the household staff. As a child she would tell me about her employment there and the dignitaries that would come to call, and how they would be entertained.

Along the way she would leave the Studebaker’s and marry and have two children, my father John and his sister, Adele.

My first remembrances of Hanna are of a whimsical Grandmother who could bake up a storm. She introduced me to Braided Cardamom Bread with pearl sugar on top and Pepparkakor cookies. The Swedes love their pastries and as a child I learned to love them too and have made them many times for my own family. Hanna never learned English all that well, but she made up for that by baking and cooking and winning over most anyone she ever met.

Hanna never drove, except for that one time that a friend talked her into getting behind the wheel to head out to buy peaches in Michigan in the 1940’s. Somehow the car ended up in drive instead of reverse and went right through the back of the garage wall. So much for driving.

She had a collection of costume jewelry that she let me play with as a child it delighted me to no end. I reproduced that for my own three daughters by buying an old dental cabinet and filling it with vintage costume jewelry. This is one of their favorite places to head in our house even though they are now young women.

In her later years she game me a tiny pair of rose gold ruby earring that she told me were her Mother’s and a green butterfly pin she bought in Sweden on her last trip to her native country.

Hanna passed more than two decades ago but along with the Swedish recipes and the costume jewelry and the wonderful little parties she used to plan for us complete with white paper doilies, I have wonderful memories about how to make life merry. That was especially true on Christmas Eve when the Scandinavians would gather and her house, and Santa would come and there would be a feast fit for a Viking. Hanna enjoyed making people happy, and when you think of it what could be better?

Happy Mother’s Day, Hanna and thanks for showing me that “Life Is A Party!”

Ann Nyberg is a TV news anchor and reporter.

Revisit Ann’s interview on No Country for Young Women