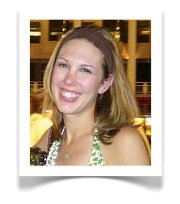 I was a film major in school – I got a BA in Visual Media from American University in DC. I also studied abroad at the FAMU film school in Prague, Czech Republic.

My first job was doing accounts payable at a live events and production company in Arlington, VA. I lied and said I was good with numbers to get my foot in the door, but in reality I failed out of the only math class I took in college! Luckily I quickly made friends with the lead video producer at the company, and within 8 months he recruited me into his department. My first project for them was working on a daily live video program at a printing trade show for Xerox in Dusseldorf, Germany. We lived on a boat for a month while we were there working and shot and edited on site – I loved it!

My mom was a radio and TV major in college and went on to work for the local PBS station where I grew up in Des Moines, IA. I saw photos of her operating the cameras in the studio and running chyron – I thought it was the coolest thing ever! She told me when I was three months old she used to take me to work and I would sleep all day in her office, so maybe you could say I grew up a production environment! She also worked for the Iowa film commission and brought films like Field of Dreams, Bridges of Madison County and Twister to Iowa. So she was my main inspiration. It was always nice to be able to talk about work and have her understand what I was talking about – she really understood the business.

I think my favorite project was a travel series in Spain where we got the royal treatment from the local visitor’s bureau. It was difficult to get a bad shot in that country! But my most rewarding project would have to be the work I did for the Humane Society of the United States. I’m very passionate about wildlife conservation and I shot and produced a series on animal related careers for the “Humane Society University” where people who were interested in embarking on certain careers could look at video clips online and decide if it was for them. I visited several animal sanctuaries in Maryland and VA and interviewed their founders. What a labor of love! People would bring in wounded birds or rabbits they found in their yard and these people would nurse them back to health and release them into the wild. It was a 24/7 job for them, and they had no lives outside of this. One woman gave farm animals a loving home who were discarded when they were too old or lame to make money for the farmers. It was such a lovely place for the animals that I never knew existed. I’m glad I got to tell their stories and show others what wonderful work they were doing.

As time goes by I think we’re seeing more and more women in positions of power at the major cable networks and production companies. Whether it’s reverse gender bias or whatever, they want to hire strong women to be on their team. In my most recent job I was told straight out by the Senior Vice President, who was a woman, that she preferred to hire women over men and in her experience they got the job done better!

I can’t say how many times I’ve been completely out numbered on set. Unfortunately I’ve only worked with a female DP twice in my life. I’ve experienced all the cliches – sexual harassment, crew guys not letting me lift any of the gear, camera guys not taking direction from a girl, etc… I had a DP completely disrespect me in front of my client on this shoot in North Carolina. This man was two hours late to set and I had to entertain my client the entire time – trying to cover for him. When the DP got there I was obviously rushing and told him where to set up, etc.. and instead of getting to work he yelled at me in front of everyone saying he needed a break for lunch and he wasn’t going to shoot a thing until he ate. It was a terrible situation. I told the story later to my boyfriend and he said “do you think he would have acted differently if you were a man?” I want to say no but I have to be realistic and think that having a female producer who is younger than you may be threatening to a more experienced, male DP. However, I’ve learned that the main role of a good producer or director is being able to read people’s personalities and playing to the ups and downs – that’s where the real craft lies. As I get older and more experienced in what I do, I become more confident in communicating what I want from the crew and not getting intimidated by egos and perceptions.

I have been very fortunate to have worked for so many talented, smart business women in DC, but my first and most influential mentor was Jennifer Cortner. Jen was the President of a production company in Arlington, VA and hired me for my first full on producer gig when I was 25 years old. Jen was responsible for acquiring the company’s largest client, AOL. She was an excellent sales woman, producer, manager, problem solver, creative thinker and she never lost her cool. She was also the youngest President of Women in Film and Video DC ever and was serving on their Advisory Board. Jen was one of those people who felt completely comfortable walking into a room full of strangers. She would come out of that room at the end of the night with a dozen new friends and a purse full of business cards, which she would promptly follow up with the next day. She talked me off the ledge a few times when I was freaking out about a deadline and in an edit suite at 2am she uttered my favorite quote ever – “Hilarey, No one will die if they do not get their video.” Wise words. Jen got me involved with Women in Film and Video and while I was working for her I was elected to the Board of Directors and won an essay contest sponsored by WIFV that awarded me with a scholarship to attend the Rockport Film and Television Workshops in Maine. Since then I’ve stayed involved in WIFV and this year I was elected President – following (trying to keep up) in Jen’s shoes. Now we’ve become close friends. It’s a relationship I cherish very much.

Get an internship in college or right out of college at your dream job. It’s a lot easier to get hired as an intern when they’re barely paying you, then you can do some networking and show them what a great asset you are to the team. You are much more likely to get a real job that way then trying to break in when you’re older. I would also say to really take networking seriously and become involved in your local film/media community. Being a part of Women in Film and Video in DC has really taken my career to the next level and in DC, which is a lot smaller than it looks, you never know who you will run into at your next job interview. You have to do a lot of work to be successful in this business and you are only as good as your last job. Never burn a bridge, write thank you notes, never think any job is beneath you, be humble and respect everyone – no matter what their position is.

Women in Film and Video DC