Celine, Engineer : Standing Out in the IT World 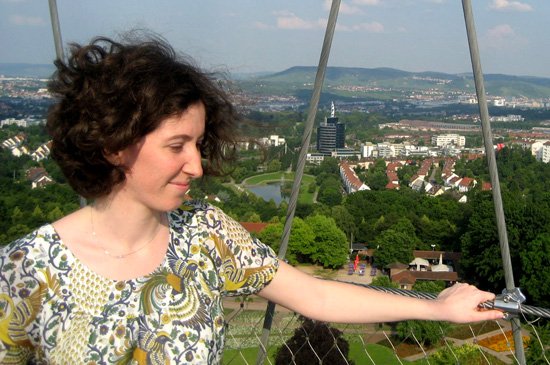 My name is Céline. I’m 28 years old, currently living in Stuttgart (Germany) and enjoying it. I think most people would say that I am French, but I consider myself as much European as French.

I’m a Telecom and IT engineer, passionate about innovation, the Internet and the mobile phone industry.

I have a Master of Science degree in France from a “Grande Ecole” named Telecom Bretagne and another one from the University of Toulouse – I have studied Telecom & Network as well as Business Engineering. I also spent six months studying abroad as an Erasmus-student (a European program exchange for university students) at the Technical University in the beautiful city of Dresden in Germany.

I worked in London as a Technology Analyst for the R&D department of a multinational conglomerate, which means that we were looking at what the company would need to do in the long-term in order to continue to grow. The job was really great and very inspiring. I had the chance to meet with start-up companies, innovators, and researchers on a daily basis. It was really inspiring to see how these people were motivated by their projects and to see how a simple idea could become a business and a force for life improvement.

I guess it was a mix of luck, hard work, and the desire to learn new and out of the box things. When I started at University, I thought I wanted to be a math teacher, but I found out it was not really what I wanted to do and ended up studying “Computer, Network and Telecom,” because a girlfriend of mine was doing it. I thought it was really cool to not only be able to specialize in one domain but also multitask/multi-knowledge in the IT area. It was a great way to fulfill my need for continual learning and discovery.

Having two separate experiences living outside of France (as a student with a professional project and once more for a personal matter) and finding out I was able to build a life, adapt myself, and learn how to communicate in two different languages other than my mother tongue.

When I find myself being the only woman (in my mid-twenties and wearing girly colorful clothes) at a conference with only men (in their mid-forties wearing black suits and white shirts). That’s the best way to be remembered! Being a woman in the IT world is certainly an advantage for the fact that it’s easy to stand out.

Because of my youthful looks and my colorful, girly clothes, or maybe just because of my chromosomes, I am always afraid that I won’t be taken seriously or that men will think they need to protect me, which is not the case. Like everyone, I like to learn from more experienced people, but it doesn’t mean I need to be protected or can’t take care of myself in the same way that a man of comparable age and experience.

I love reading biographies, especially the ones about people who broke out and discovered something – the inventors of the last two centuries. Of course, as a woman I am very inspired by women inventors. They were so brave and such pioneers for that period. Marie Curie inspires me. She left her home country of Poland, where she wasn’t able to study, and then she had such a huge career while raising two kids mainly on her own (Pierre Curie accidentally died 11 years after their wedding). I also admire Bertha Benz who worked with her husband on their automobile business, and Gabrielle/Coco Chanel, who always insisted on doing things her way.

As a woman in a man’s world, people always ask me how hard it is. To be honest, I do not believe it’s harder than in any other area, even if I only have experience in this particular profession. The thing is, since high school I have studied and worked primarily with only men – we have usually around 10 to 20% women in IT – so for me it is natural. I would tell young women starting out in this field not to listen to their teachers saying that they can’t have Engineering or Science Degrees (Yes, I did hear that as a teenager), and I would tell them to follow their curiosities and express themselves—they should follow their dreams… dismantle and put back a non-working appliance, or to write their first code program, go out and join a Science, Technology, Engineering, or Mathematics university program! In the end, there is no reason to be afraid.

Let me finish with these two quotes that summarize my advice:
“Yes, I am a wanderer on this earth – a pilgrim.” Johann Wolfgang van Goethe, The Sorrows of Young Werther
“I haven’t failed. I’ve simply found 10,000 ways that do not work.” Thomas Edison