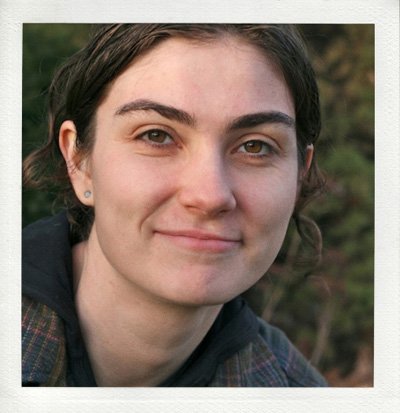 My name is Elizabeth De Saussure, I’m 24 and located in the D.C. area.

I’m juggling a few different part-time and freelance positions at the moment, but consider my primary career to be film/media production. I work most often as a P.A., but have also done gigs as a boom operator and grip. I have recently begun to focus on screenwriting and producing.

I received my B.A. in Sociology from Arizona State University. I didn’t discover my interest in film until it was too late to change my major without delaying graduation, but a year later, I re-entered school as a M.A. candidate in American University’s Producing for Film and Video program.

My very first job, I worked at a hot dog joint on an Air Force base in England. I technically worked for the federal government at age fourteen.

My friend from high school, Andrew Dollar, had been involved in film as long as I could recall, and one day he invited me to come work with him as a production assistant on a low-budget indie that was being filmed in our area. It was the most fun I’d had in years, and it was also the hardest I’d worked in years, so I continued to accept gigs after the film wrapped and my name had started being passed around.

Hands down, the most rewarding project I’ve worked on has been The Invisible War. I was then (and continue to be) blown away by how much of an impact a documentary can have on such a large scale. I was involved with the project for just under a year, for almost every single D.C. shoot, and was invited out to Sundance to see it premiere. Every day I went in to work, I was surrounded by strong women and men who were advocating for something so incredibly important. I couldn’t have been prouder to have been chosen to be involved with the film.

There are a lot of little incidents that made my professional life easier because I was a woman. Oftentimes when I am liaising between the production and a vendor, I notice an immediate shift in attitude once the communication involves me directly. I think people consider women as often mitigating tension, which makes interactions much more pleasant and has more than once helped me maintain relationships between productions and clients and vendors.

I had a supervisor who made misogynistic jokes to others and me on staff. It was a large company that offered many opportunities to climb the ladder (so-to-speak), but I ended up leaving the position as soon as I could because I was tired of being the general target of derogatory statements (among other things).

I wouldn’t say I have a role model or mentor exactly, but there are a number of women I admire tremendously. My mom (somewhat obviously) is first and foremost, but also included are Amy Zeiring, Susan Burke, and Anu Bhagwati, who I have seen to have incredible strengths for advocating for those in need of a voice. They are all reminders of what is possible, even in traditionally male-dominated roles.

Be your own advocate. The film industry is run off of strong personalities, and it’s easy to get stepped on if you let it happen. Women aren’t necessarily trained to be aggressive the way men are, and that can often give others the impression that a woman might not be strong. It’s important to recognize that there are times when it’s important to not back down on sticking up for yourself.