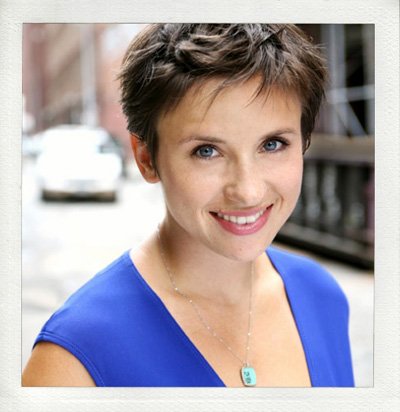 I have a bachelor’s degree in Anthropology and American Studies. I also studied jazz singing.

I worked on an angora rabbit farm in Northern California when I was 9. My job was to pluck the rabbits (it doesn’t hurt them, they love it) and comb their fur to get it ready for spinning into yarn. I swear this is true.

Working on a play in New York, I met a group of women – actors, directors, producers, writers – who comprised the collection of artistic collaborators I had been seeking all my life but didn’t know it. We decided to make a feature film together, Like the Water, that started with the desire to address what we feel is mostly missing on film: stories about women we recognize and identify with. These women are messy, difficult, take up space, and they also allow one another to grow and change. They are not just competitive or catty as we are all taught, but are better people because of their friendships with other women.

Producing the film Like the Water, no doubt. We had to go through the ordeal of raising the money and in doing so we had to really foster and grow ourselves and our community of support. We had to push and pull and encourage each other. We had to fight and make up and get smarter all the time. We managed to push the film from concept to completion in one year. And we stood together at the premiere, a group that grew to nine women in all the key positions, one year to the day after we started shooting. It felt like an incredible triumph just to be there together. At the end of the film, a woman I would later come to learn co-founded Hardy Girls Healthy Women said, “Thank you. You made a movie about a woman we don’t get to see very often.” That moment was one of the most rewarding experiences of my life to date. The movie project inspired Seed&Spark because I believe that crowd-funding is about community building, which women excel at naturally. My hope is that Seed&Spark will level the playing field and give more, different kinds of independent stories the chance to reach and build an audience.

This is a really hard question. I’m not sure that I have thought about my career and my womanness as related. That said, I have a much younger sister (age 12) and two beautiful step-daughters (ages 9 and 6) who make me more hungry to succeed in the film/tech business, where I am straddling two industries still vastly dominated by men. Women hold only around 17% of the behind-the-camera positions in entertainment. That’s a dismal number. That might also be why I don’t see a whole lot of film and television that I feel like gets close to representing my experience as a woman in 2012. I am sort of terrified by what’s influencing my sister and step-daughters. So with Seed&Spark my hope is that greater audience access means more kinds of stories told. That starting my own company – statistics be damned – is a good example for them.

It probably hasn’t, since I don’t tend to take no for an answer. Maybe it has just forced me to think outside the box. Women aren’t represented well in movies? Let’s make one where they are. Women aren’t represented well in media? Let’s start a new company in media, mostly run by women. Part of the reason I founded Seed&Spark is because I believed there was a better way for hardworking filmmakers – not just women but anyone whose idea falls outside the “marketable” categories – to raise money, connect with and monetize their audiences. It’s a problem that a lot of people have tried (and are trying) to tackle, which means there is a market for it!

When fundraising for our film I was asked to jump through hoops that my male counterparts had never heard of. But these challenges have also forced me to get very clear about the value of my project, my company, my idea, or my own strength as a leader.

Is it so cheesy to say my mom and dad? My mom managed a huge company for many years and I always admired the way she was a leader. She led very thoughtfully. Her employees loved her. I can call her anytime with leadership and management questions big and small. My dad is a strategy consultant and one of the best people to talk through a big strategic problem. He’s always full of helpful advice, my favorite piece of which is “Just do the next right thing right.” Which may have been handed down from my grandfather, actually. Anyway, it helps me take deliberate action when I am feeling overwhelmed with all there is to do.

TAKE UP SPACE. Don’t be too polite or quiet. Don’t make yourself small. The world needs what you have, so don’t hide it. Speak up!