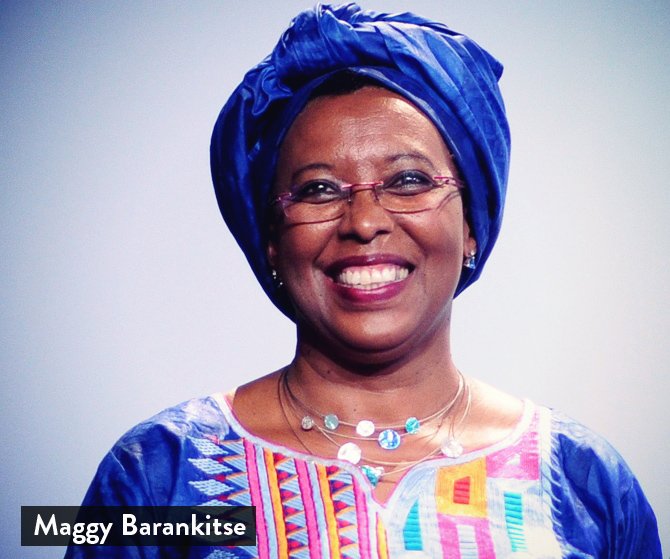 I’ve been asked on several occasion was has been – for me – the most memorable moment of the 2012 Women’s Forum. Without hesitation: hearing humanitarian Marguerite Barankitse tell her powerful story.

I encountered Marguerite “Maggy” Barankitse at the event “Africa: The True Power of Women” held in a small, cocoon-like amphitheater of the conference center. At the beginning of the event, the lights dimmed and a projectionist launched a video about Maggy Barankitse. It literally took my breath away. I was so affected by her powerful story of courage, resilience, and generosity, that tears streamed down my cheeks (and I would remain in a daze for at least an hour after the end of the event).

I searched for the video in order to embed it in this post, found it, just watched it again, and could not help but be moved to tears for a second time. Here it is:

What struck me the most about Maggy Barankitse is how positive she is – she truly radiates hope and happiness. All this despite the tragic, horrific events she has witnessed in her lifetime.

Here is what she had to say:

A woman’s calling, is to give life. It is an extraordinary calling. I can give you an example. When was broke out in my country [ndr: Burundi], all the men went in hiding. But the women, before escaping they made sure all the children were accounted for. And they made sure that the children could be fed and cared after. I am convinced of one thing: that women have an extraordinary calling and thus I have a lot of hope in women. If they wanted to, women could even stop wars. I’ll give you another example: during the war in Burundi, I noticed that the fields kept being cultivated. I was surprised – everybody was in hiding. So one day I decided to go find out what was happening. I saw that women were working in the fields at night, using kerosene lamps, and they would hide during the day. That’s why we had crops that were cared after. I found it extraordinary. If these women did it, it’s because it was a calling for them, a mission.

When we talk about Africa, the first thoughts are always ‘AIDS’ ‘poverty’ ‘misery’… It shouldn’t be like this. You should think of Africa as a continent that radiates hope, just like your faces. I see so many radiant women. We shouldn’t take ourselves too seriously. Like the singer Joe Dassin has sang, “It’s not going to really change the world, the world has already turned so many times without us, and it will continue to turn when we’re not here anymore.” What we have to do, is to put down seeds. We need to give the best of ourselves.

Don’t ask me where we’ll be in 10 years. Don’t ask me about numbers. I am not an economist. I am simply a mother, who fights on a daily basis for dignity. Even if I may not have anything to give my children, I have love. And love is extraordinarily resourceful. I am not here as a prophetess, but I have to say, we can surprise you. Africans can change the world. We have female ministers. We have female economists… We have an amazing woman who is going to head the African Union. We have all these women… The Western world only wants to talk in terms of numbers. Well, we can surprise you and tomorrow Africa will be rich. And rich in love, might I add.

Throughout the talk, I had a strong urge to give a hug to this woman – a true hero – who has improved the lives of tens of thousands of people in Burundi. And I got my wish. At the conclusion of the event, I approached Marguerite Barankitse, complimenting her for her extraordinary work. After hugging her, she said to me: “You see, it only takes one person to change the world.”

What an extraordinary woman…

If you want to find out more about Maggy Barankitse and her work for Maison Shalom, visit: maisonshalom.org