From the archives: here’s an interview of comedian Heather Gold – originally published in May 2010. 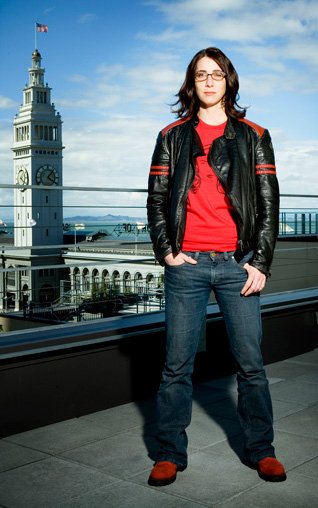 I have a BA in English from Yale and a JD (a law degree) from Northwestern.

Other than doing work at my grandparents’ variety store? I was a PA on commercial film shoots. I remember working on a 30-day shoot for Cadillac ads in the 80s. It was a feature length budget and schedule. I got a raise and more responsibility because I could write and I wrote everyone’s bios, even the directors who told me one day they wanted to package my breasts up and take them with them on their shoot in France. Beyond this moment, it was amazing and my boss was a kick ass woman. You wanted details, right?

The misery of law school and the examples of Sandra Bernhard, Janeane Garafalo, Tony Kushner and an early alternative comedy show in LA called UnCabaret.

My solo show, “I Look Like An Egg, but I Identify As A Cookie,” in which I bake chocolate chip cookies with the audience as I share my coming of age / coming out journey and search for my whole self, navigating identity politics. I learned so much in writing, performing and producing this show, and I had the freedom of not knowing what you were or won’t supposed to do. I used a lot of what I learned from the Net live in the show and discovered a great deal about interactivity and how to bring people together. It was a major step towards my dreams and as a bonus, the show did well, was even profitable, and won some awards.

I’m sure I’ve been given an extra look in some instances where all the speakers they’ve already booked are men and they want to make an effort to have some women in the lineup. And when I was researching comic book and game companies for New Line, the guys seemed so desperate for female attention that they’d easily tell me everything about their business.

How many ensemble comedies with women do you see? I plan to turn this into opportunity and write one.

I remember being so excited to go to dinner with a well-known Silicon Valley startup advisor I hoped would mentor me but then it turned out he just wanted to tell me he and his wife had an “open relationship” and hit on me. That kind of crap happened a few times in my twenties.

I have so many. I’m eclectic and cobbling together so many things to make a new digital era creative career. I don’t really have a mentor now, and would love one. I do get occasional advice from pals like Kamau Bell who also does smart, political stuff and director Linda Mancini who’s a performance art veteran and directed Reno. She’ll be working with me some on my next piece which is exciting.

Artistic inspiration: Oscar Wilde, Tony Kusher, Lisa Kron, Patti Smith, Reno, Patton Oswalt. Inspiration on how to have a successful independent/bespoke co-creative digital career: Jonathan Coulton and Merlin Mann, Zoe Keating and Doug and Kent of “Ask A Ninja.” Inspiration to create and own my own talk show: Johnny Carson, Rosie O’Donnell and Oprah and Leo LaPorte. So many more: Eve Ensler, Barbra, Paul Mooney, Todd Haynes, French and Saunders, Julia Sweeney, to name a few. Women who took the time to actually mentor me include Sara Little Turnbull, a pioneering industrial designer, my law school professor, Jane Larson, and my first full-time boss, Michele Newman, when I was at New Line.

Find reliable people or a reliable person to give you regular emotional and creative support. It is incredibly vulnerable to open yourself up on stage and there are always more guys out there doing it and they are generally more confident or comfortable faking it and selling themselves. You need people who will tell you you’re brilliant and they believe in your dreams and you even when you’re not sure you believe yourself. That support will help you feel entitled — that your stories and ideas matter as much as anyone’s — because you need to believe that in order for anyone else to, and there are always fewer examples of women’s lives being lived in public.