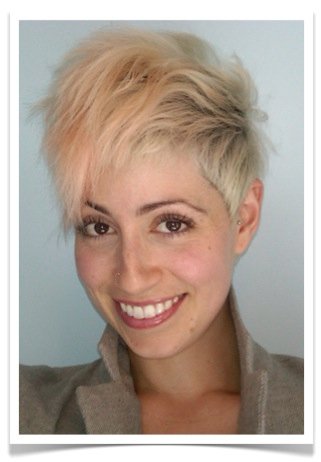 I’m the creator of Up and UP New York, an internet web series about dynamic, young women creating a new world in New York City. I write, shoot, edit, concept, program and organize all aspects of creative and business development.

I have a Bachelors of Science Media, Culture and Communication from NYU. I also had a few extraordinary internships that taught me a lot as well.

My first real job was at a teen girls clothing store called Delia’s in the King of Prussia mall, which is the largest US shopping mall in terms of leasable retail space. For two years, I worked every Saturday night for $6.75 an hour. Then, all of a sudden, I was promoted to assistant manager and rocked it. When I moved to New York, they hired me in their corporate office as an intern. I literally came to New York at the age of 18, already having an excellent job that I held for another two years. I learned every single aspect of running a successful lifestyle brand. My “um whatever” mall job launched my career.

I was inspired by all the pop culture I grew up with as a child. That’s why I came to New York, to create exciting media for smart women. I always envisioned myself as an executive working for someone else. But after a host of internships and a very unenthusiastic job search, I really realized that it would take me 30 years to do anything on my own within the establishment and my projects would always be held back. I worked anyway to get more experience, but I was always working on my company, readying myself to take the leap once and for all. New York is magic. And once it seduces you, there’s no going back.

Up and UP New York, a webseries about a new culture of dynamic, young women starting businesses and leading movements in New York City. The show is in development, but already it’s fantastic. The site is gorgeous. The clips are inspiring. I really believe it has the potential to change the world. And right now it’s in its sh*ttiest form! That’s so awesome to me.

I’m involved with one group called SheSays and I write their newsletter. Being part of that core team has been really phenomenal because I get to learn about so many people and companies and projects, plus the women in SheSays are so cool and the work is really fun. I couldn’t do that if I was a man because it’s all ladies running the show.

I personally don’t think that being a woman has hindered me. I’ve had extremely sexist experiences and I am absolutely appalled and opposed to white, male hegemony plaguing the world, but really my biggest challenge has been my age and the fact that I smile a lot and am nice. I don’t know what it is, but whenever I try to play by the rules, it backfires.

I know how this sounds, but honestly, my role model is Jesus Christ. I look up to Jesus because he was such a revolutionary and I don’t think anyone else in history has ever tried to do so much in such a short amount of time in such a huge way with so much opposition and the least amount of help! Jesus is truly the ultimate entrepreneur. I would never want his life, but I gotta give that man props. I also love Karl Marx and advertising legend Mary Wells.

Only ever depend on one person – you.

Up and UP New York

Up and UP on Kickstarter.com