After studying art as an undergraduate, Julie Morey spent decades working as a designer, art director, and brand strategist. Then in 2007 she became one of the founders of Elastic Lab, a unique video production company that uses crowdsourcing and collaboration to experiment in production and distribution. She currently serves on Elastic Lab’s executive team as Chief Creative Officer, overseeing the development and production of both commercial and art-based video content. 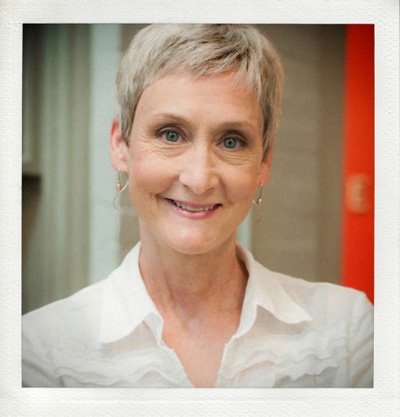 I spent 30 years as an advertising art director. Four years ago, I decided to use my experience making television commercials and documentaries to start a company called Elastic Lab. We create original video programming for the web and cable television. I concept, produce and direct.

I have a BFA from Auburn University in my home state of Alabama. My passion has always been drawing and painting. The school offered a few commercial art classes my senior year, but basically I have a strong foundation in traditional fine art.

I was hired as a comp artist for a Denver ad agency specializing in high tech clients. It was 1977, a few years before computers became part of our industry, and we rendered every ad concept in markers and paint for presentation. I really had no marketable skills beyond drawing and learned the rest on the job.

I was told once that all experience is worthwhile. Starting at 15, my jobs included sales clerk (where I learned to be on time and how to deal with boredom), receptionist (where I learned business etiquette) and cabin girl at a dude ranch (where I learned the perils of riding yearlings and that I wanted to live in Colorado.)

Art is the only thing I ever wanted to study. My father is the one who suggested advertising. It sounded interesting enough. It has turned out to be an incredible ride.

The pivotal project for me was an early film for The Walter Kaitz Foundation, which promotes diversity in the cable industry. They were headquartered near San Francisco at the time. We took a small crew to California to talk with people of color about their life experiences. These extraordinary men and women – all successful in their careers – allowed us into their lives to share very personal stories about themselves, their families and their journey. It’s a film I still love, my first foray into a documentary world where nothing is conjured, everything is real.

I don’t know if this story is about being a woman or about how individuals handle situations. Many years ago, I was part of an advertising team (art director, writer, account manager) working on a large bank account. The bank’s marketing department was comprised of three women with very distinct personalities. My writer and account manager were both men. Agency-client relationships are filled with negotiation and can be contentious, but we had managed to do beautiful work for them for several years. When changes at the bank foreshadowed the end of our contract, my co-workers decided they were done with this client. Unwilling to just walk away from work we were proud of, the three women and I navigated the last months alone. Frankly, it was a lot less dramatic.

I’ve never felt hindered but am certainly one of the few women my age still working as a creative.

I have to go back to the very beginning. My first employer was George “Red” Gates, a brilliant ad man a few years shy of retirement. He was a teacher at heart, and preferred hiring young staffers and training them in his style. I spent the first two weeks of my career drawing the same image over and over until he was satisfied. I told my parents I thought I was going to get fired, but instead Red kept teaching – color theory, photography, printing techniques, presentation skills. Then he took a long fishing trip and left me in charge at the age of 22. “Just do your best,” he said. “I’ll clean anything up when I get back.”

A few years ago he was on my mind, long retired and nearly deaf. I made a call I’ll never regret to tell him how much his guidance meant to me.

Women are good listeners with a knack for empathy. Embrace those qualities and find the stories that need to be told. Listen for the kernel of truth and fight for it.