Meet Rachel Hills, a bright Australian writer who, at the tender age of 28, has already penned over 100 feature articles, essays, op-ed pieces and reviews for print and web publications across Australia, the United States and the UK. Rachel’s blog Musings of an Inappropriate Woman was named Australia’s best feminist blog by the Weekend Australian Magazine (2009) and was nominated for Cosmopolitan‘s 2010 Fun Fearless Female awards. Rachel’s goal? To become “the Simone de Beauvoir of the internet.” Here is her story. 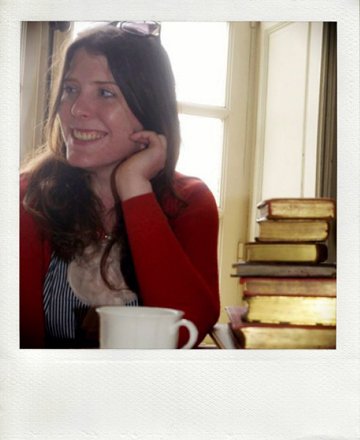 I did my undergrad at the University of Sydney, with majors in Media & Communications, Gender Studies and English (not as exhausting as it sounds). I’m now writing my PhD on Gen Y, sex and identity, at the Journalism and Media Research Centre at the University of New South Wales.

I was a sales assistant at a discount department store, working in the sheets and towels department. It was a terrible fit for a 15-year-old girl. I lasted less than six months.

I started my first website when I was in high school, around the same time I held down the department store job. I’d spend a few hours to a day each weekend sitting at home writing up content for it. It was through doing that that I realized I enjoyed writing more than anything else, although it took me until half way through my final year of high school to start thinking of it as a viable career option. I was also always very interested in sociology-type issues, although I didn’t have the language to identify them as such until I got to university.

That’s a tough one – there have been a lot of great projects. I really loved running the ElectionTracker.net project in 2004, which sent four young journalists aged between 18 and 25 on the road with the prime ministerial candidates during the Australian Federal election last year. Editing Interface, which talent spotted new intellectual talent and gave them a public platform, was great as well. I’ve written a lot of stories I’m proud of, and while I don’t get paid for my blog, I really value the way it’s helped me develop a relationship with my readers that would be very difficult to achieve solely from writing for mainstream media. I hope – and believe – that my most rewarding early career project though will be my PhD and resulting book, tentatively titled The Sex Myth.

Well, I write a lot about issues affecting women, so being a woman probably helps with that!

None come immediately to mind. I have observed subtle, unintentional sexism in some of the men I’ve worked with – mostly in a kind of boys club mentality, which means they tend to think of each other whenever roles come up – but I usually call them on that, and in most cases the situation has been resolved positively.

I’ve long admired both of my thesis supervisors, Catharine Lumby and Kate Crawford: they combine academic research, accessible mainstream cut through and practical impact in a really inspiring way. I love the work James Fallows, Sandra Tsing-Loh and Caitlin Flanagan (I disagree with her politics, but she’s an awesome writer) do for The Atlantic, and I admire Ariel Levy as much for her New Yorker essays as I do for her book, Female Chauvinist Pigs. And Alain de Botton and Naomi Wolf. On a holistic level, I also really admire Simone de Beauvoir’s work ethic, her commitment to her friendships, and the interesting, vibrant life that she led.

Be proactive. Media is a competitive industry, but if you’re persistent and you’re good, your work will be picked up sooner or later. It’s effort as much as talent that determines who “makes it” and who doesn’t, so stay up until midnight perfecting and sending out your story pitches if you have to.