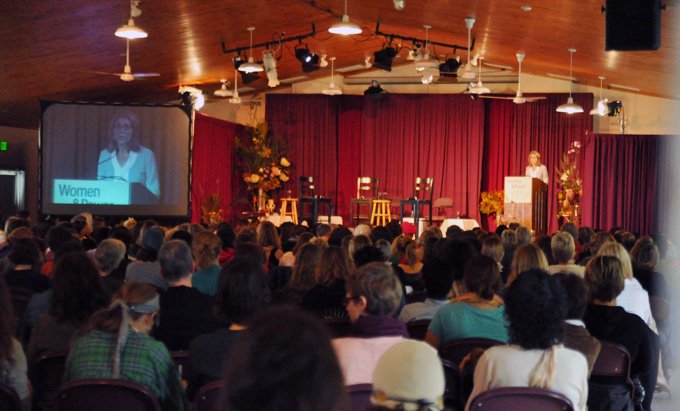 The Women & Power conference at the Omega Institute in Rhinebeck, New York, was one of the most inspiring times to stand up and get outraged about the situation of women both in the US and internationally. From stories of rape camps in the Congo, to women in Haiti working all the time for no pay, to young female sex workers in America and abroad, to the pitiful statistics on women in positions of power in our own country, I left with a vengeance to turn passion into action.

Elizabeth Lesser, New York Times best-selling author and one of Oprah’s latest consultants, opened the conference with some words on American politics. Lesser talked about Cassandra from Homer’s Iliad. Cassandra was the Princess of Troy who had the power to see into the future. But instead of trusting Cassandra when she warned the Trojans not to accept the infamous Wooden Horse from their Greek opponents, they disregarded her prophecy and sealed their tragic fate.

Lesser argued that women today are in similar positions to that of Cassandra. They have the power to change the fate of the world, but they are overwhelmingly cast aside and taken for granted. Women still earn a mere 70 cents for every dollar that men earn, even though women are now over 50% of the work force and 40% of women are the primary breadwinners. In the US only 3% of decision makers in the media are women, and on top of that, we are bombarded by unrealistic media images that promote the theory that a woman’s only powerful tool is her sexuality and physical beauty.

But amidst all of these sobering statistics, the Women & Power conference was a time for inspiration. I heard from the first African-American woman to travel in space (Mae Jemison), from the leader of the Women of Liberia Mass Action for Peace campaign (Leymah Gbowee), from the former president and CEO of PBS (Pat Mitchell), from the cofounder of Women for Women International (Zainab Salbi), from the inaugural poet (Elizabeth Alexander), and from the first woman editor of the New York Times (Gail Collins), among many others. All of these women have overcome countless hardships and obstacles to go where no man has gone before.

Women & Power made me realize that, in the words of Ani DiFranco who gave an electrifying musical performance, the only cure for the war-torn, AIDS-ridden, impoverished state of the world is the promotion of women into positions of power. Until there is true equality between the sexes, patriarchy will continue to set the world spinning out of control.