Emily May, Social Entrepreneur : Talking About a Revolution 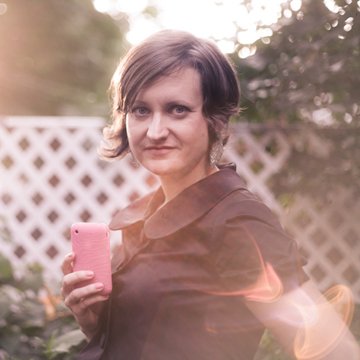 Undergraduate, I went to New York University and got a BA in Politics, Cultures, and Identities with a focus on the intersection of race, gender, sexuality, and class. For graduate school, I went to the London School of Economics and got a Master’s in Social Policy and Planning.

My first job was cutting crab grass (a weed) of golf greens with a serrated edge knife for $4.25 an hour. It was hot, grueling work that required a knack for polite conversation with old men (i.e., golfers). The only perk was free soda. They have since made a chemical that kills crab grass without killing the rest of the green, and the job is obsolete.

I was inspired to start Hollaback! because I was frustrated by a lack of a response to street harassment. When we walked on we felt victimized. When we yelled at men the situation escalated, and the police didn’t care. So we started Hollaback!, and encouraged women and LGBTQ folks to “Hollaback” at their street harassers by telling their street harassment stories. Five years later, thousands of people have holla’ed back across the world, and new Hollaback! sites continue to launch. It doesn’t get much more beautiful than that. Running Hollaback! has been an activist fairy tale, and it’s only going to get better with the launch of the new iPhone and Droid apps.

The anti-harassment ads that we helped to get in the subway take the cake. The MTA wasn’t going to do it, because they thought that the ads would “encourage harassment.” Sam Carter, another Hollaback! co-founder, and I wrote an op-ed in the Daily News where we were like, “Do anti-terrorism ads cause terrorism? Do those anti-long horned beetle ads get the beetles all riled up?” The MTA got the point, and just as we were about the hold a press conference on the issue with our partners, New Yorkers for Safe Transit, the MTA called us and reversed their decision. The ads have been up for two years now, and still every time I see them I get a big fat grin on my face.

I get to Hollaback! As anyone who has ever holla’ed back can tell you, it’s a pretty badass experience. It transforms this totally lonely, disempowering moment into a super hero experience, because it’s not longer just about you. Your hollaback makes thousands of women and LGBTQ individuals feel better, and by doing so, takes noble strides towards building the world that we seek. It’s totally changed my experience of living in New York City, and without it, I wouldn’t be in the position I’m in today.

We applied for a grant to do Hollaback! that was pretty technology-related. It was the kind you voted on, and we were top ranked and had the top page views the entire competition. We made it to the second round, but when it came time to give awards we didn’t make the cut. The only women who did were also on teams with men, and even then there were only two out of almost twenty project leads. I hit my head on the glass ceiling hard that day.

When I was about 10 years old, my aunt gave me a biography of Susan B. Anthony. I was so fascinated by her story. She thought women deserved the right to vote, and everyone thought she was nuts. “If you don’t want your husband to vote for you, you shouldn’t have married him!” Now, we can’t imagine it any other way. I think that street harassment is going to take a similar trajectory. Sure, the naysayers may argue it’s free speech for now, but in the history books they are going to sound just as crazy as the people who thought that women shouldn’t have the right to vote.

Be fearless. We can’t waste time worrying about if we are not smart enough, skinny enough, or charming enough. It’s not about us; it’s about the world we seek. We’re going to have to be bold if we want to build it.