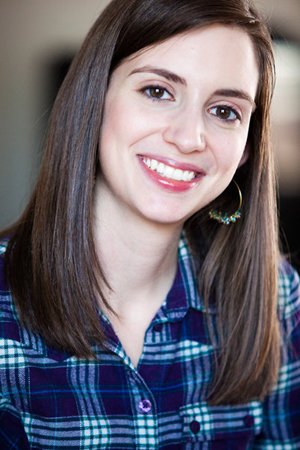 I created She’s the First, a global campaign supporting girls’ education worldwide, in November 2009 — so I self-identify now as a social entrepreneur and digital storyteller. By day, I am a web editor for Hearst Digital Media, in the Network Programming division.

I graduated with a Bachelor’s degree in Journalism from The College of New Jersey. My minors are in Spanish and Women’s and Gender Studies.

My first job out of college was being the assistant to Chris Johnson, who was at the time the Director of Content for Hearst Digital Media. But instead of just having me do administrative duties, he let me launch three teen sites and a video series — I’ll be forever grateful for the learn-on-the-go, hands-on opportunities he gave me.

I’m also a former library page, Friendly’s waitress, clothing store salesperson, and summer camp counselor — sometimes I think those odd jobs teach you most of what you need to know in life. Your post-graduate career fills in the crevices.

As a student, I was dead-set on being a print magazine editor, and my three college internships were at print magazines: Seventeen, JANE (now defunct), and Ladies’ Home Journal. But I had a professor, Kim Pearson, who never stopped preaching the importance of digital media in her classroom — and this was before college students even used Twitter. I’m only 24, and saying that makes me feel like a dinosaur! Senior year, Professor Pearson had an Interactive Journalism class and our assignment was to turn a well-reported feature story into a Web site. My site was an interactive journey through the life and work of MacDella Cooper, a Liberian War refugee and humanitarian, who started the MacDella Cooper Foundation to serve the educational and basic needs of abandoned children and orphans in Liberia. I later became Director of Operations, and my love of international affairs and the non-profit world spiraled out of that.

Being a woman has given me the wonderful opportunity to grow my career within New York Women in Communications, which welcomed me into its membership when I was student in 2005. I now serve on the Foundation Board of NYWICI, under the leadership of my first NYWICI mentor, Joan Cear, who leads us tirelessly in fundraising for college scholarships and mentoring the next generation of leaders in the communications industry.

NYWICI is like a greenhouse — it’s this amazing space full of energy and warmth and you just blossom inside of it…but you’re in the presence of women who have broken the glass ceiling. Go to one of the organization’s annual Matrix Awards at the Waldorf Astoria and you’ll find out what I mean.

When I’m wearing high heels all day that really hurt. But truthfully, I’m not being serious with the question because I don’t believe being a woman has been a factor in my chosen career path. I’m thankful for that.

My ultimate role model is Ruth Whitney, the legendary editor-in-chief of Glamour magazine, whose legacy I learned of when I was awarded a scholarship in her name by New York Women in Communications in 2005. I wrote an open letter to Ms. Whitney in The Huffington Post, describing why I admire her so much, and you can read it here.

Don’t be afraid to be the first.

She’s the First PSA :”Women Who Change the World”