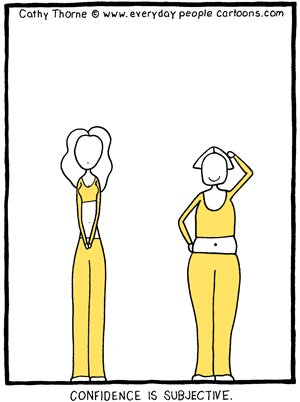 My professional history begins in 1996 in art school. I stood paralyzed by fear of failure in front of an easel for almost three years until I decided to give up trying to be great and did what felt right: cartooning, which ironically turned out to be great! When I graduated, I began making cartoon greeting cards and magnets to sell at local gift shops, and sending sales kits to newspapers.

My first newspaper client was the largest daily regional newspaper in North America: The Toronto Star. Had I not had a huge success at the start, I may not have had the stamina to handle the multitude of rejections that followed. Rejections come from simply putting one’s self out there, but mine also had to do with timing: I hit the tail end of the newspaper business. Today that market barely exists, and I, like many cartoonists, am searching for new ways to earn a living. I’ve ventured into online syndication, licensing, commissioned work, and print-on-demand, and I’ve even published my own book.

When I started at The Toronto Star, I didn’t even have a website. My used computer took five minutes to power up, and I was new to email. I drew my cartoons and mailed them to newspapers through the post office. Now, I’m all over the web, and I’ve been nominated as one of the top 10 social media cartoonists. Which I think is a hoot!

A WOMAN AT THE DRAWING BOARD

I have experienced no known challenges in my profession as a result of being a woman, and I have the women who went before me to thank. There aren’t as many women as men cartoonists, but I don’t think that affects me negatively. I believe I get as much work and get paid as much as I would if I were a man.

My cartoons choose me. I go about my life, and something funny happens to me, or a thought simply occurs to me, and there it is! I write from my point of view, which happens to be female. I think if I were a man, I’d experience life as a man, which might be different from a woman—although I can’t be sure, can I?

THE BEST OF BOTH WORLDS

I’ve worked through the births of both of my children. I’m on a freelancer’s schedule, so there’s no maternity leave. To be honest, I think working kept me sane though the mind-numbing boredom of around-the-clock breastfeeding. There’s only so much daytime television a woman can watch. Instead I’d click away at my computer, draw cartoons, send off proposals—it kept my mind nimble. We live humbly, so I’m able to stay at home and work part-time hours. Most days I feel like I have the best of both worlds: I’m able to do what I love and chase my kids around all day.

My advice to women starting out in cartooning is to do the best you can, do it in your own style, learn about the business, know that only a very few make a living cartooning, and don’t let that stop you. I’d give the very same advice to a man.

—As told to Jessica Gross, a writer based in New York City.

For more information about CATHY visit her cartoon site at www.everydaypeoplecartoons.com.